The Social Evolution of Plastic Surgery

Plastic surgery has evolved to be more inclusive over time and encompasses a vast set of patients seeking care. From the Egyptian pharaohs to today, the evolution of social perception of plastic surgery has significantly improved. 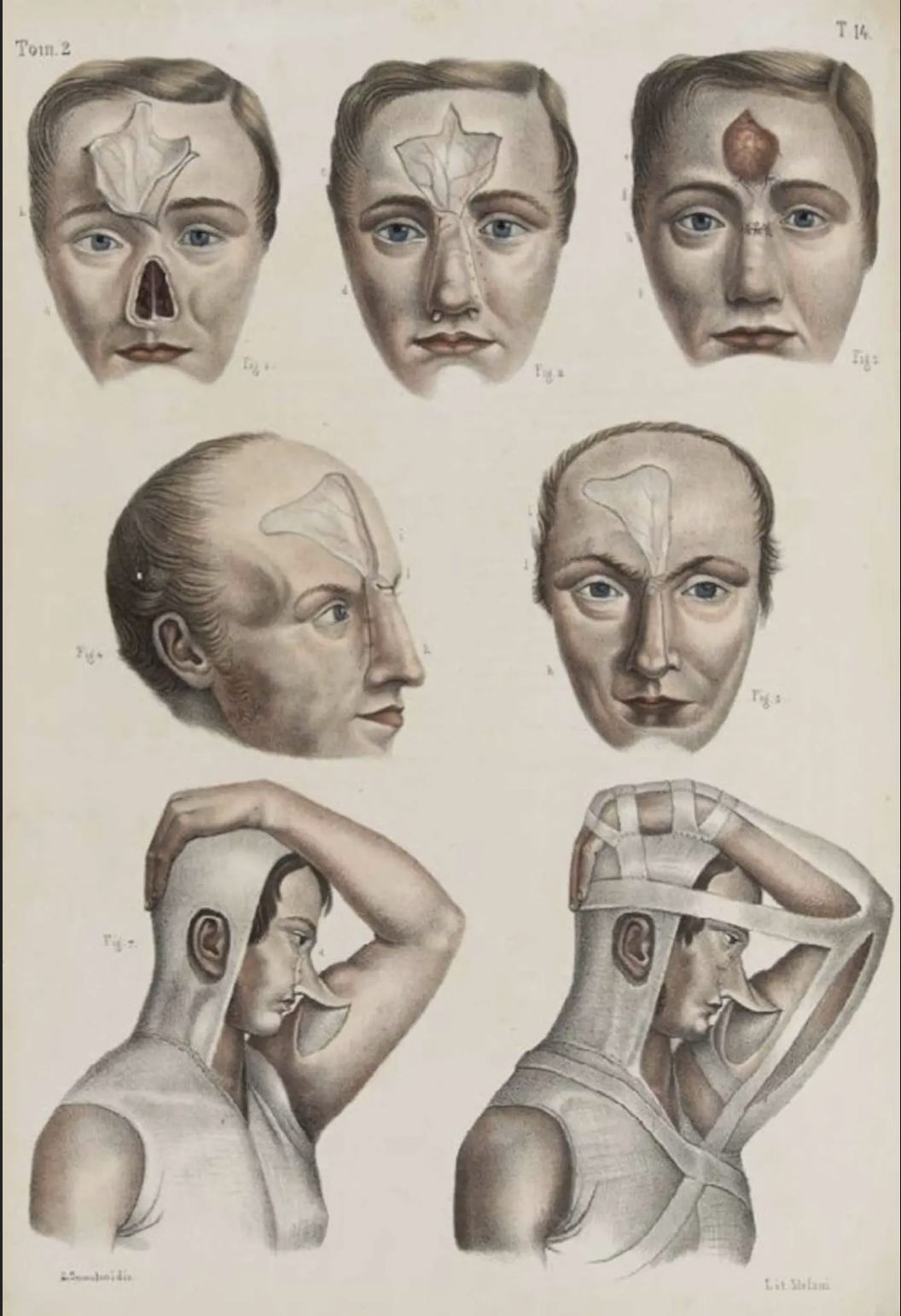 For centuries, plastic surgery was experienced only by the most elite and most wealthy—even dating back to ancient civilizations.

In fact, plastic surgery was integral to royal families in Egypt's 19th Dynasty.

Let's take Ramses II, who name means "Keeper of Harmony and Balance" as an example. Over eight hundred years ago in ancient Egypt, his dead body lay waiting for burial. Wanting to preserve their loved one's appearance, Ramses's family took particular pains to ensure that his nose was unharmed during the mummification process. They performed on him what we might consider today plastic surgery. Believing that his appearance would follow him into the afterlife, Ramses' family plugged his nostrils with bones and seeds to keep his nose—and honor—intact.

Fast forward to the mid-twentieth century, and plastic surgery has maintained its opulent reputation. It has also garnered a reputation cloaked in shame and secrecy. Previously used to conceal symptoms of sexually-transmitted infections and termed black magic by Roman Catholics, plastic surgery has a complex and at times shameful past. The field's association with those sexually, morally, and religiously suspect also made it off-limits to the masses and made it understood as a treatment to be avoided.

With the coming of the 21st century, however, the barrier to plastic surgery has begun to break down. People are beginning to view plastic surgery differently—from a luxurious and at times shameful procedure to one enjoyed by the working class. In part, 3D modeling is responsible for this shift. Helping physicians ensure exceptional surgical results to patients from all socioeconomic backgrounds, the models are attracting people to the procedure whose experience with it might otherwise be limited to the pages of a grocery store tabloid.

In this article, we show how 3D modeling has helped change plastic surgery from an opulent, and in some sense deviant, pastime to one now enjoyed by the common man. We do so by explaining how the perception of plastic surgery has changed over time—and ground these transformations in the advent of 3D modeling.

Public Perception of Plastic Surgery: Then and Now

As we'll come to see, however, this veil has been lifted, leaving the public less critical and patients feeling less judged for going under the knife.

As a result, plastic surgery has become more normalized than ever before and more accessible to those who otherwise might have shied away.

Let's take a closer look at this transformation.

Then: A Culture of Secrecy and Disapproval

Up until the last few decades, plastic surgery was not only associated with the wealthy but was also deemed something to be hidden and ashamed of. Although the public's feelings towards the procedure have a complex, dynamic history, we'll attempt to tease out these feelings by looking at two key events that shaped plastic surgery's less-than-glamorous beginnings.

16th-century plastic surgery: A means to conceal syphilis - Plastic surgery's shameful and secretive reputation continued into the following century. With the rise of syphilis during the 16th century, Europe braced itself for perhaps its most pressing public health concern. The epidemic left millions grappling with a reputation for sexual deviancy and the fear of facial decay. A particularly devastating symptom, soft tissue decay is one that, if left untreated, might leave a gaping hole in one's face where the nose otherwise would have been. Doctors used plastic surgery to prevent this facial disfigurement and protect their patients from a life marred by psychological scars and social isolation. In doing so, they also helped associate the field of plastic surgery with the fringes of society, making it ever more isolated from the masses.

Though far from comprehensive, these events shaped the public's perception of plastic surgery. Unlike other forms of medicine, plastic surgery was grounded in disgrace, religious impurity, and racial prejudice. This largely negative conception of the field persisted through the mid-20th century—that is, until its normalization and the invention of 3D models.

Now: A Culture of Acceptance

Towards the end of the 20th century, the western public began to normalize—and even laud—plastic surgery and its patient outcomes. The American public showed its shift in perspective in a few key areas that helped make plastic surgery accessible to the masses.

Public dialogue and opinion - Media, and in particular reality television shows, demonstrated western society's change of heart. It began to prize plastic surgery as a means to create compelling and popular television content. Shows including The Swan and Extreme Makeover were premised on using plastic surgery to transform an “ugly duckling,” offering her a new face, and, supposedly, a new shot at life. Though the shows later received their fair share of criticism for insensitivity, ratings spiked and helped reconfigure the public's perception of plastic surgery as psychologically healing and worthy of open discussion. This improved outlook had even developed years prior to the shows and was documented in a study by the American Academy of Cosmetic Surgery. The research found that “the number of people surveyed who...approved of cosmetic surgery increased by 50 percent between 1982 and 1992” and that “the number who disapproved of plastic surgery declined by 66 percent.” Such improvements in public perception helped to make the surgery more socially acceptable and, in turn, accessible.

Higher incidence of plastic surgery - This improved opinion also coincided with a rise in plastic surgeries performed in the United States. An early 2000's New York Times article cited over a 228 percent increase in the overall number of cosmetic procedures. This upsurge, found by the American Academy of Cosmetic Surgery, occurred over the course of less than a decade and is one indicator of the public's growing acceptance of and willingness to partake in plastic surgery.

Increase in population participation - Interestingly enough, the spike in the number of plastic surgeries was not concentrated in the most elite, wealthy, American families. According to a 2004 study conducted by the American Society of Plastic Surgeons, “about a third of people considering plastic surgery reported average household incomes below $30,000.” Dr. Paul A. Blair, a facial plastic surgeon interviewed by the Times, substantiated this finding, explaining that in the past decade he had noticed a surge in “blue-collar or lower-salary professionals” in his clients, noting that he often treated “teachers, retirees, psychologists, [and other] regular middle-class working folks.” The U.S. was not only encountering a rise in plastic surgery but was also experiencing this upsurge among the social classes that had previously been cut off from it.

Again, though far from comprehensive, these recent developments in plastic surgery and the American society's perception of it are demonstrative of a shift in public opinion. More to this point, they are indicative of plastic surgery's shift into the lives of the working class.

3D Technology: Making Plastic Surgery Accessible to the Everyone

Although there are many potential reasons for this shift, one contributor to the democratization of plastic surgery is the advent of 3D models. Gaining popularity in the plastic surgery community over the last decade, 3D models have been used to improve the quality of patient consultations, surgical results, and—perhaps most relevant to this argument—patient trust in their surgeons. Surgeons are increasingly able to improve their relationships with patients and bolster the field's reputation by creating 3D models of patients' body parts and using them as guides to ensure the best surgical outcomes.

Emily Gorge, a recent New York City plastic surgery patient, perfectly encapsulates this advancement and its connection to 3D models. The 3D print of her face before and after rhinoplasty was an ultimate game-changer for Emily, helping her decide that she would indeed go under the knife. She explains that if she “didn't have the 3D print, [she] would not have underwent surgery” because she “wouldn't have felt comfortable not knowing what the outcome would be.” Emily also discusses how she could “put the model up to [her] face and have such a more realistic idea of what [she] would look like if [she] did have the surgery.”

Emily, post-surgery, next to her 3D facial model. (Source)

The contribution 3D models have made to improving the patient-plastic surgeon relationship have been documented across multiple media platforms within the past decade. This discussion is resemblant not only of the public's willingness to openly discuss what was once a shameful procedure, but also to embrace and partake in it.

The Changing Face of Plastic Surgery

Previously limited to the elite and wealthy, plastic surgery is now more accessible than ever. In part, this democratization has occurred because more patients are seeking doctors for all types of procedures (from cosmetic to reconstructive) and asking for personal visualizations and custom plans to reduce fears around surgery. Helping improve patient trust in plastic surgeons, 3D technology continues to cast the field in a positive light—one that is only going to shine brighter for years to come.